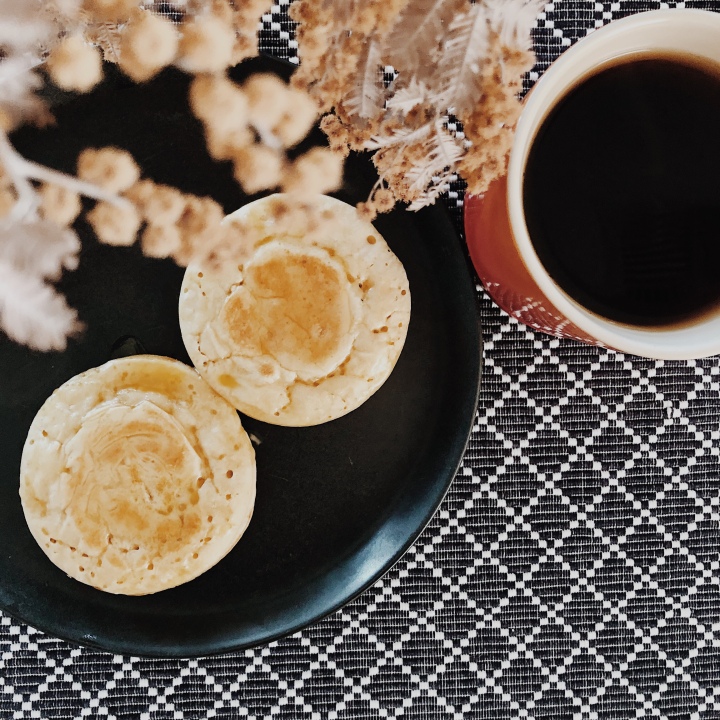 I’ve had a long love affair with crumpets. To me, they’re the perfect snack – just enough to curb your hunger without spoiling your next main meal, and you can eat them with both sweet and savoury toppings (honey + butter and grilled cheese are my two recommendations).

Adam and I have consumed quite a few packets of supermarket crumpets over the last month, so when a recipe for homemade crumpets popped up in one of my social media feeds the other day, I took it as a sign that we needed to try making them ourselves…

As you’ll soon learn, this recipe from Australia’s Country Style magazine didn’t quite go to plan.  Adam, the ever confident cook, made a few tweaks, but to be honest our crumpets were a little underwhelming! That’s kitchen experimentation though isn’t it?  Sometimes you find a winning recipe, other times not so much. I’ll note what we did and what changes we’ll make next time, and perhaps you’ll have more success.

How to do it

This recipe calls for a very runny batter.  The first lot of crumpets we cooked turned out very flat (see picture below) and hardly had any rise. We ended up adding about double the amount of flour the recipe called for… but even then, the crumpets still felt a little deflated. Consulting a few other recipes after we’d make our crumpets, it seems a 1:1 ratio for flour and milk/water is the way to go.  Adam thinks using bread flour instead of plain, might also help with the rise.

Processed with VSCO with m5 preset

Processed with VSCO with m5 preset

Although our crumpets were a little lacklustre, they still toasted up nicely and we enjoyed ours with a cuppa for morning tea.  We’ll keep tinkering with the recipe and if we find a winning combination, I’ll be sure to post an epilogue ;).  In the meantime, if you’ve got a good crumpet recipe, I’d love to know!

Have a wonderful week.

4 thoughts on “The quest for crumpets”