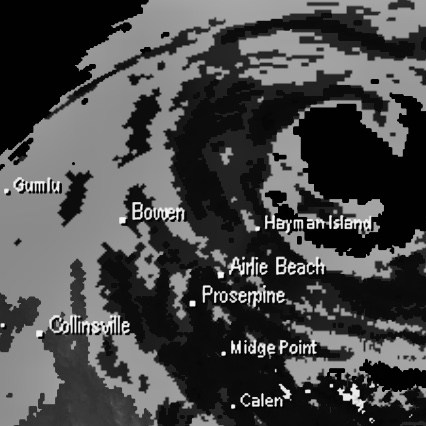 Over the last few days I’ve been watching from afar the build-up, impact and effects Tropical Cyclone Debbie has had on Queensland.  The category four storm bashed into the Whitsunday coast between Bowen and Airlie Beach earlier this week, with my hometown of Mackay (just over an hour’s drive to the south) copping its fair share of destructive winds and torrential rain too.

My dad was away when Debbie took her time crossing the coast, so my mum had to face the storm by herself.  She’s been through a few other cyclonic experiences and our family home is built to withstand tropical storms, but I still felt her sense of nervousness about the situation. She made the decision to ride out the bad weather by staying with our neighbours across the street, so she wasn’t alone.

I haven’t lived in Mackay for over a decade but it’s a place I’ll always have a soft spot for. I’ve watched other natural disasters affect the region from my home in Wagga Wagga, but when you’re abroad that distance to ‘home’ I think is more keenly felt.

Due to the time differences and telecommunications being affected by the weather, I had to rely on my brother (who lives in Canberra) to filter through information from mum.  There was a good 18 hour period where I hadn’t heard anything, and I just had to sit tight and wait for the timezones to realign so I could get an update. I’ll admit, it’s been one of the few times since I’ve arrived in England that I felt a little isolated from my family.

I went into full journalist mode, monitoring social media sites, news sites, watching the coverage of the storm by ABC News 24 on my laptop, as well as listening online to ABC Tropical North‘s rolling emergency broadcast.  It was both strange to hear so many Australian accents again, but comforting at the same time.  It made me appreciate how wonderful technology is during natural disasters. Here I was in England, hearing, watching and reading the same information that was available to the people being impacted.

For Adam it’s been eye opening too, as he’s visited most of the areas that’ve been affected. Right before we flew to England we spent time in Proserpine and Bowen, as well as the Pioneer Valley (which has had over 1000mm – or nearly 3.3 feet – of rain this week) and last year we had a wonderful holiday cruising around the Whitsunday Islands in a yacht. All I’d say are now looking a little worse for wear.

My mum is back in our family home again and is thankfully part of the minority of Mackay residents that has power. It’s still raining heavily in the region and flooding is now the big cause for concern. My dad should hopefully get home by week’s end – if the roads aren’t closed.  Adam and I are planning on doing a video chat with my parents this weekend, which no doubt will be full of cyclone stories.

Have you ever felt isolated from family during a natural disaster? What did you do to help keep yourself calm and in the loop of what was happening?

One thought on “Disasters and distances”