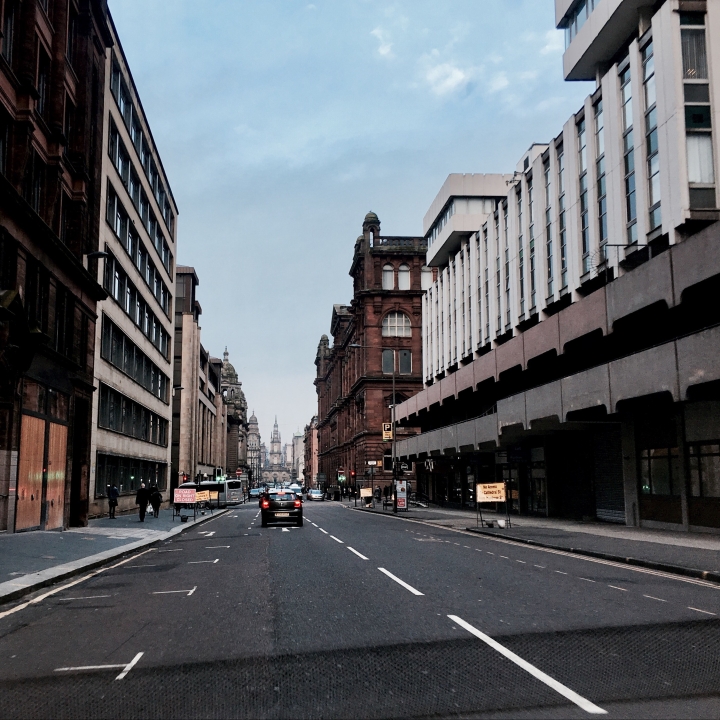 I first visited Glasgow back in 2010. I saw the CBD briefly from a bus and then spent an uncomfortable night in a cheap hotel near the airport. Needless to say, I don’t have any enduring fond memories of Scotland’s largest city.

Last week I found myself back in Glasgow, albeit for 36 hours.  This time around I was determined to see the ‘real’ Glasgow…

Adam and I made the 320 mile (515 kilometre) journey north from Malvern with his brother John and best mate Tom for a gig.

We arrived on the Sunday evening in the pouring rain at an Airbnb apartment in the inner city suburb of Dennistoun. The following morning we were able to get a real appreciation of the area. I had a great time gazing out of our large third storey windows at the surrounding tenements.

Inside the apartment was furnished with a minimalistic, Scandinavian feel to it. Although there wasn’t a heap of ‘stuff’ about, everything felt quite intentional and it gave the whole place a lovely calm and curated vibe.

Our first full day in Glasgow started slowly over cups of tea and coffee at ‘home’, before wandering down to recommended local cafe, Tapa Organic Bakery, for breakfast. There, we feasted on the biggest bowls of porridge I’ve ever seen. I was defeated by my serving, but the boys were all able to finish their bowls.

We walked into the city via the Glasgow Necropolis – which is meant to be one of the city’s most haunted places. Some of the graves, tombs and sculptures on site were amazingly beautiful and you get a wonderful view of the Glasgow Cathedral from the cemetery’s highest point. 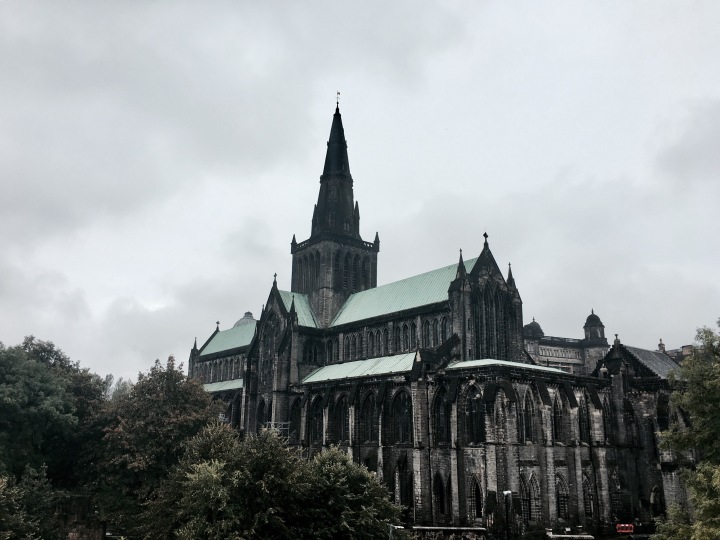 We ate lunch in a tea-room (which turns into a gin bar at night) before retiring back to the apartment in the afternoon for naps and board games.

The gig, a three hour show by Icelandic band Sigur Ros, was amazing. Adam has been a big fan of the band’s music for years and I was introduced to them while at university. The show was like nothing else I’ve ever experienced. A sensory overload at times, but something I walked out of going ‘wow’.

We were up early the following morning to make the long drive home again. Although it was a short visit, I feel like I had the opportunity to appreciate Glasgow much more than I had previously. The city has some amazing architecture, really friendly locals and after being named a European Capital of Culture in 1990, has developed itself into an artsy/creative hub. I adored Edinburgh when I visited seven years ago, but I’m glad I’ve taken the time to return to Glasgow. It didn’t impress me at first sight, but now it feels like proper urban Scotland. Glasgow is definitely worth checking out.