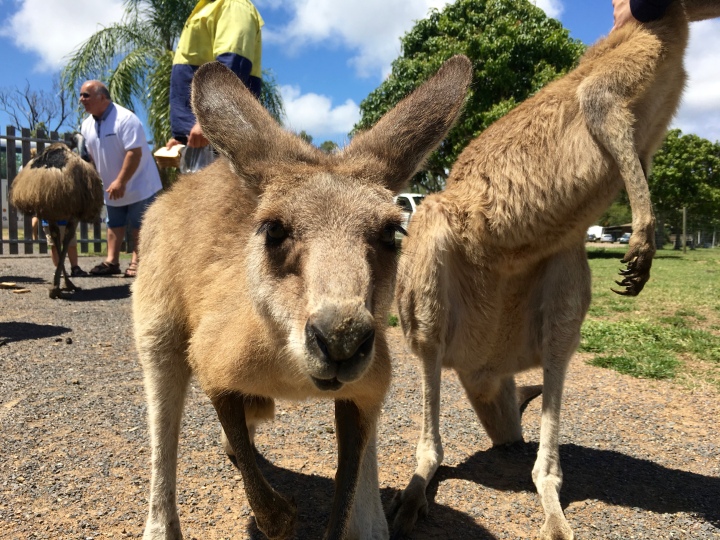 At the start of the week Adam and I visited a wildlife park, to the north of Mackay.

The 175 acre property, run by the Bredl family, is surrounded by coastal bushland and in its centre is a beautiful dam teaming with turtles, eels, fish, birds and the occasional guest…

As we were driving in, we spotted a small crocodile in the water – our host for the day Zeb told us, it wasn’t one of the park’s crocs and must of ‘washed in’ during the last lot of heavy rain!

The Bredl family are well known in Queensland for their work with crocodiles, which was the main reason we decided to visit – Adam was yet to see one in the flesh.

Uncle Rob Bredl was recently bitten on the hand by one of the crocs, but we were told he’s recovering well.

The family says what makes its park experience different, is the ability to get hands on with the animals.

We started our tour hand feeding a rather cantankerous cassowary.  She liked to eat whole tomatoes (and even mangoes!), as well as the crusts of bread, strawberries and watermelon.

It was then onto a large, grassy enclosure that backed onto the dam to feed Eastern Grey kangaroos, a pair of emus, a deer called Bubbles and dozens of chickens and geese.

Afterwards we went onto the crocodile pens, where we saw four of the reptiles – all between 3.5-4.5 metres long. People call crocs modern day dinosaurs and when you look at them, you can see just how prehistoric looking they are.

After the crocs, we learnt about pythons and lizards like the blue-tongue, shingle-back, and a beautiful little monitor with scales that must be the inspiration for some of the Indigenous art found in Australia. 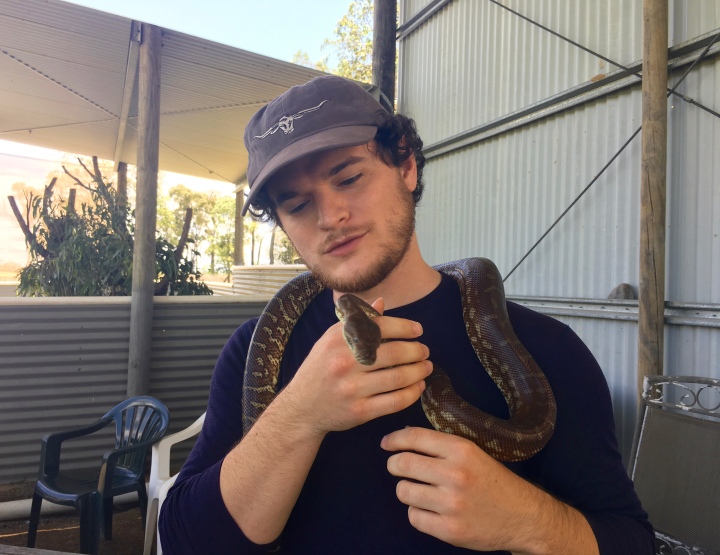 One of the highlights for me was getting to cuddle a koala.  I even managed to get a curious kiss!

We finished the day by holding some of the baby crocodiles that get farmed on site.

Adam and I had a great day out, and loved how interactive the tour was.  The small group of tourists on site also meant you never had to wait too long to get up close with the critters!

2 thoughts on “All creatures great and small”