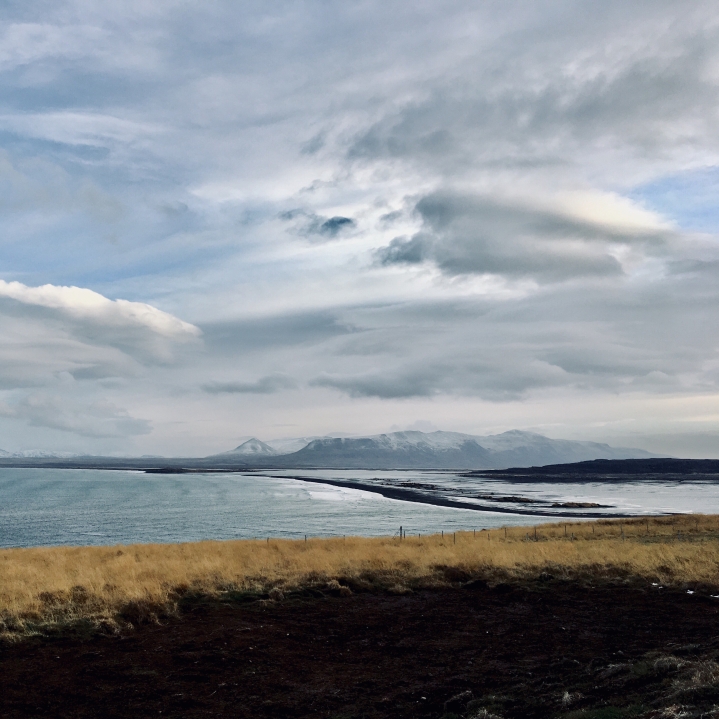 One of the most exciting parts of my recent trip to Iceland was the fact that we got to explore the north of the country. Two of our party, including Adam, had done a bit of sight-seeing around the south, but the north was a whole new frontier.

It didn’t fail to deliver…

After leaving Hella, we made our way north past Reykjavík and Borgarnes. Our planned itinerary for the day didn’t have anything scheduled apart from the drive, so we kept our eyes peeled for the special signs on the side of the road which indicated a site of special significance.  The Glanni waterfall, was a lovely unexpected discovery. 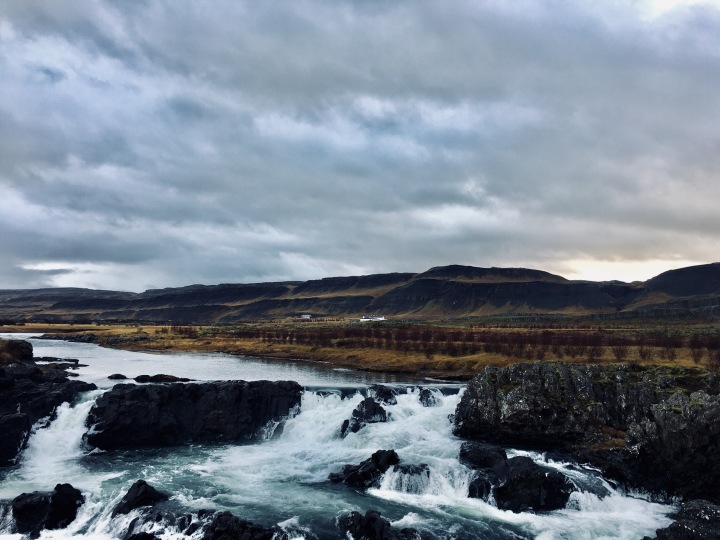 It was only a short walk from the designated carpark and we had the view to ourselves. I quickly discovered that Iceland has an abundance of waterfalls, but they’re all so different, it’s worth stopping to see them all. That powerful sound of water crashing about, is just so mesmerising.

Next up was Hvítserkur – a rock that looked like a dragon drinking water on the shores of the Vatnsnes Peninsula. 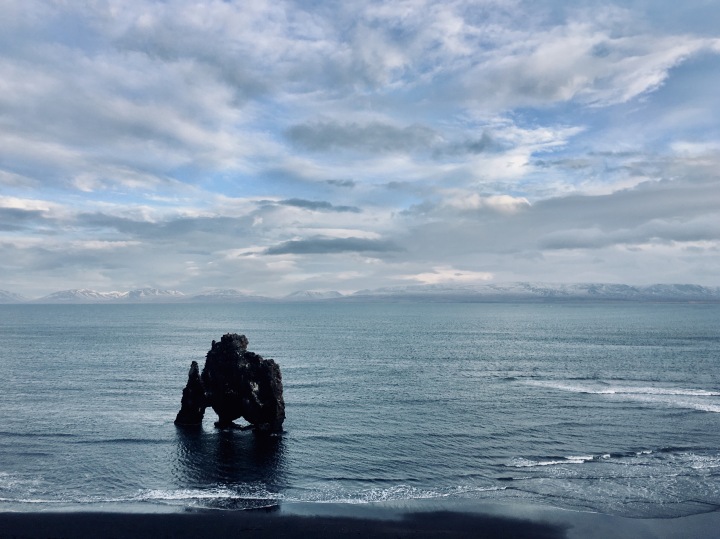 There was a steep path leading down to black sand beach, but I couldn’t get a good grip and chickened out of making the descent. I took the opportunity to take in the view from up high and my travel companions made sure I still felt included ;). 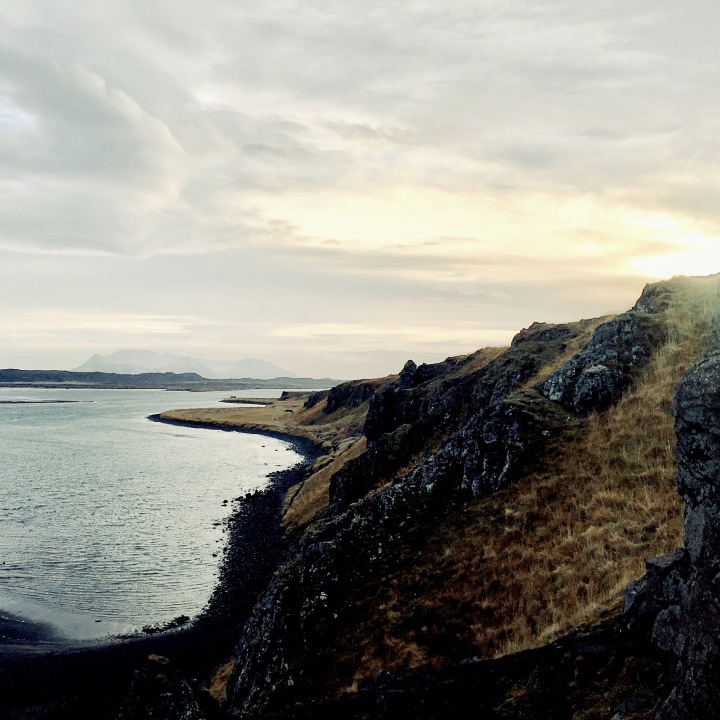 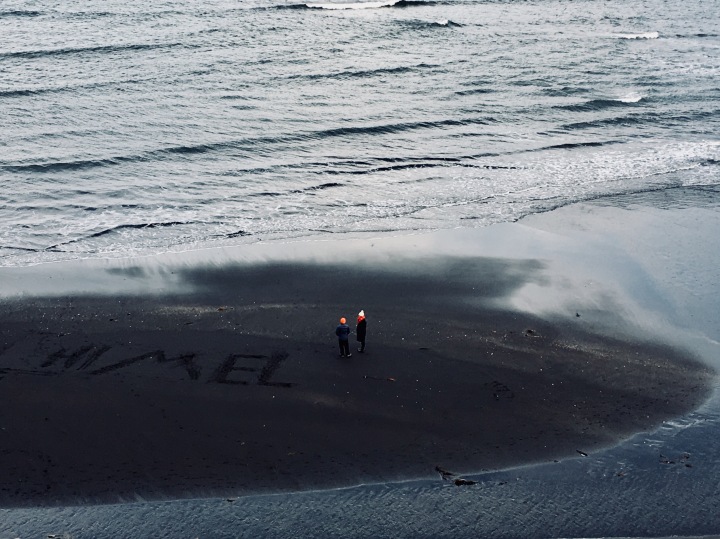 Not far down the main ring road around Iceland, we turned off into a desolate looking valley, encased either side by snow capped mountains. It was here that we were to spend the night, in a dome shaped cabin on a sheep farm. 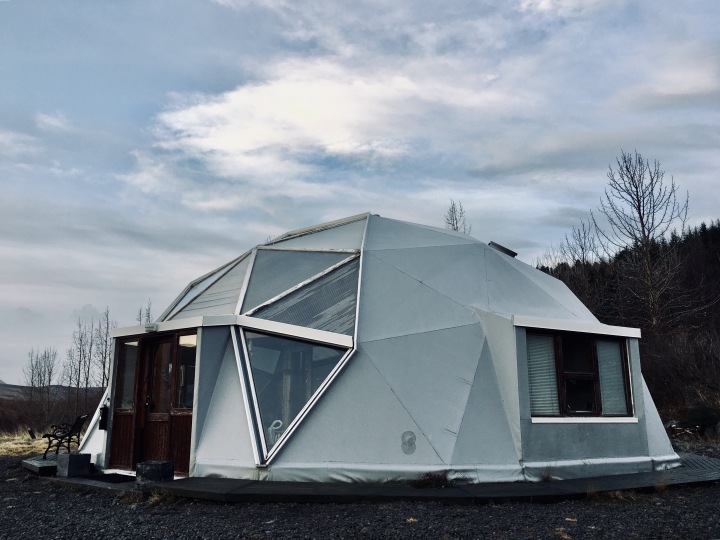 The decor inside was reminiscent of an alpine ski resort in the 1980s, but it was warm and tidy. Long term farm resident, Dyngja the Icelandic sheepdog, became a favourite companion and loved playing fetch with a rather chewed up red ball. 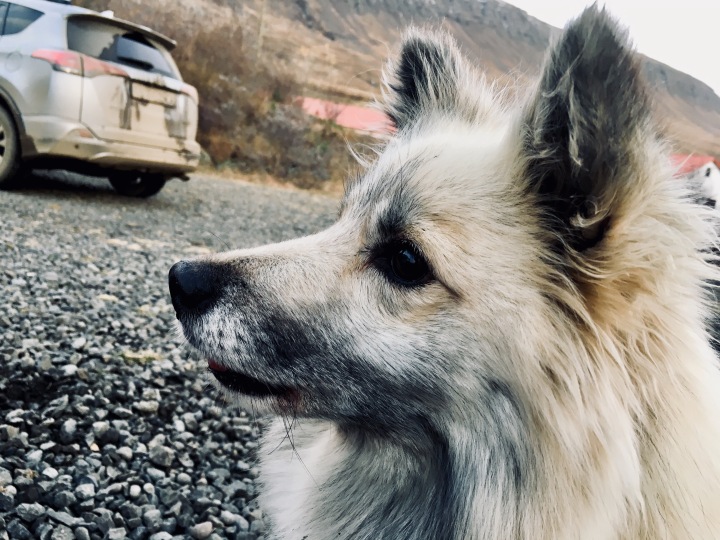 Adam and I took a lovely little walk up onto a hill overlooking the farm in the later afternoon light and the following morning the view from our sitting room windows was just breathtaking. 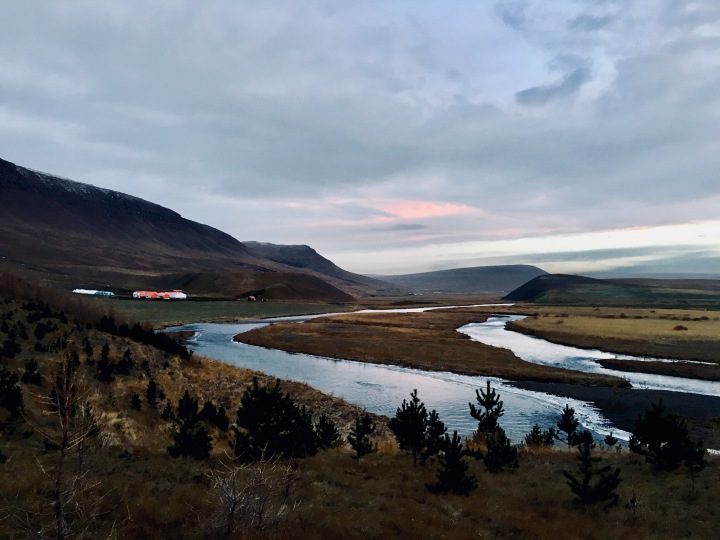 Our first stop on our next day on the road was the small seaside town of Blönduós. We drove down to a suburb right on the water’s edge. It was full of colourful houses made of wood, stone, and corrugated tin with the cutest square windows. 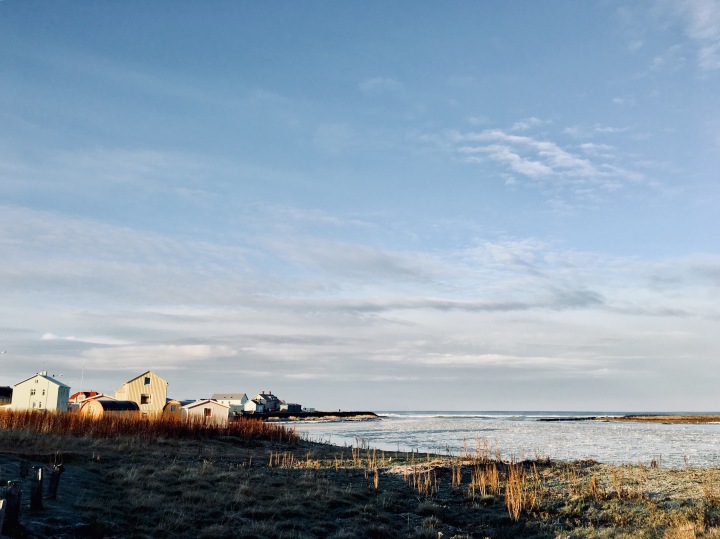 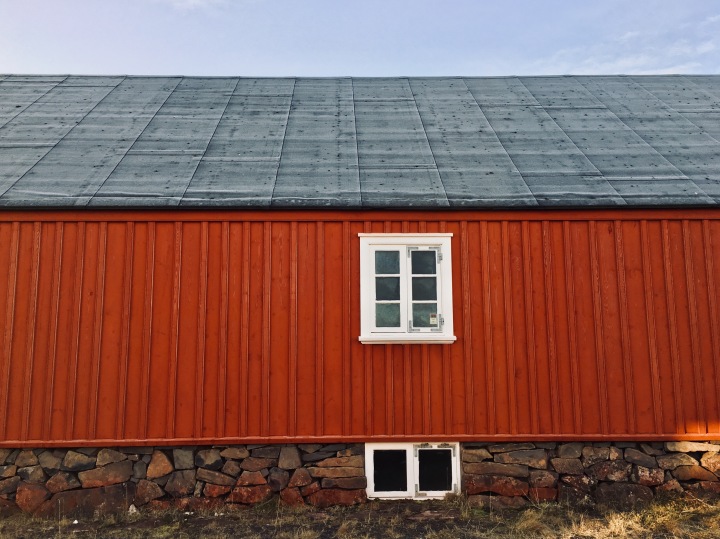 We took a walk, again on black volcanic sand. It was surreal. Instead of the buttery yellow tones I’m used to in Australia, here the sand was as dark and fine as a winter’s sky. It was scattered with large chunks of ice and the usual beach flotsam. The water too was full of ice and although it was picturesque, I was definitely not tempted to jump in for a swim! 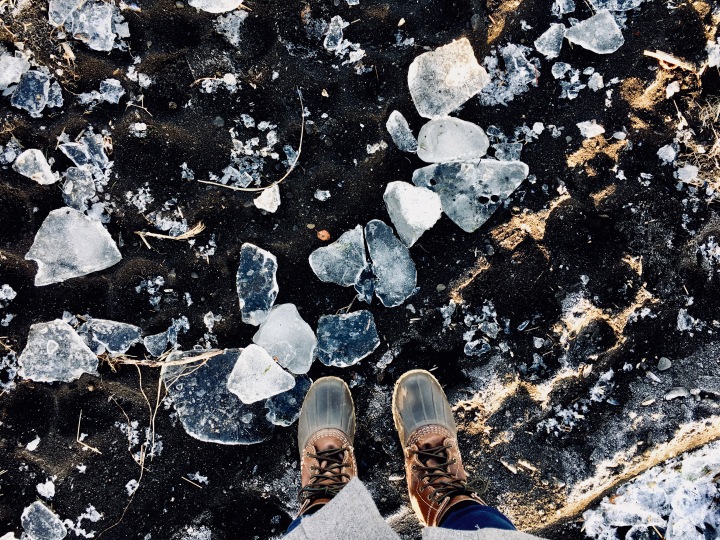 From there, we started to climb high into the mountains. Snow became more widespread and the in-car thermometer stayed well below 0°C. It was absolutely freezing out in the open, but the views though… oh my goodness. 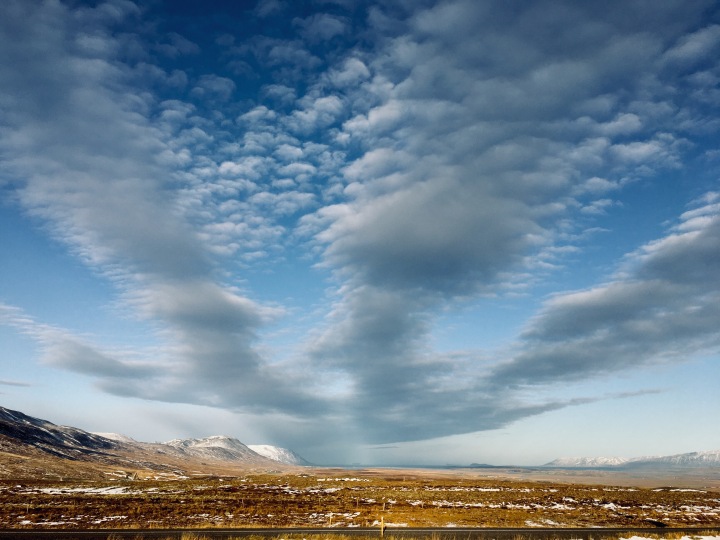 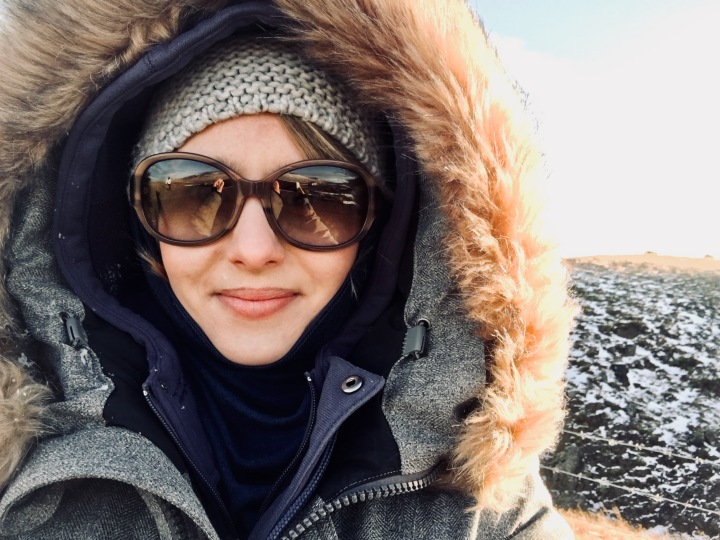 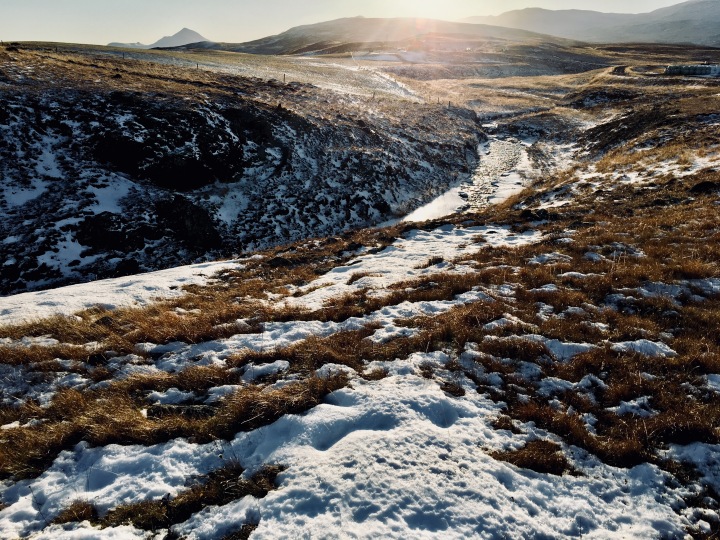 We drove down into another stunning valley, pulling over to see the most gorgeous grass roofed church, near Varmahlíð. 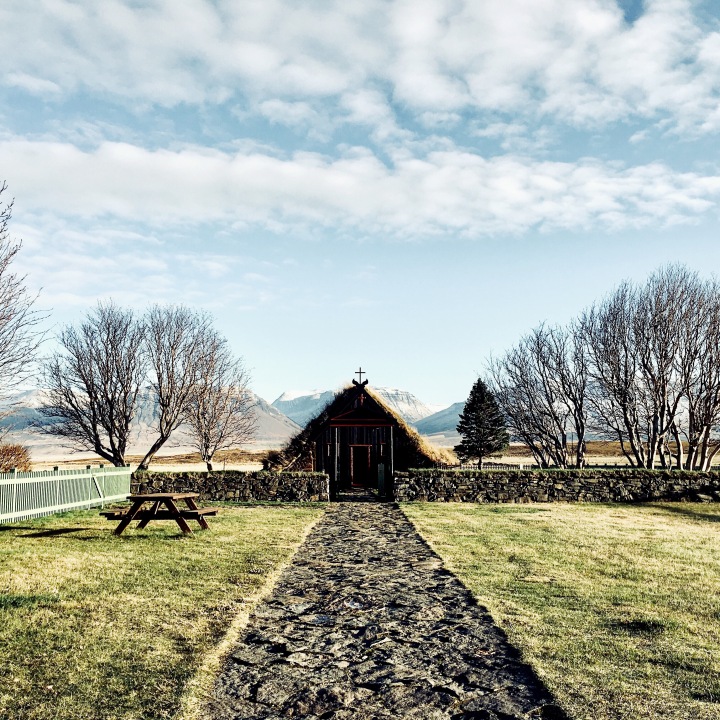 Soon we were climbing into the mountains again. This time everything turned white.  It was almost like being in a black and white movie, bar the yellow guideposts on the side of the road and the tufts of golden grass poking themselves out of the ground. The four of us got rather excited at the site of so much snow and as soon as we were able to find a bay on the side of the road to pull into, we got out and had a play in the powdery soft ice. 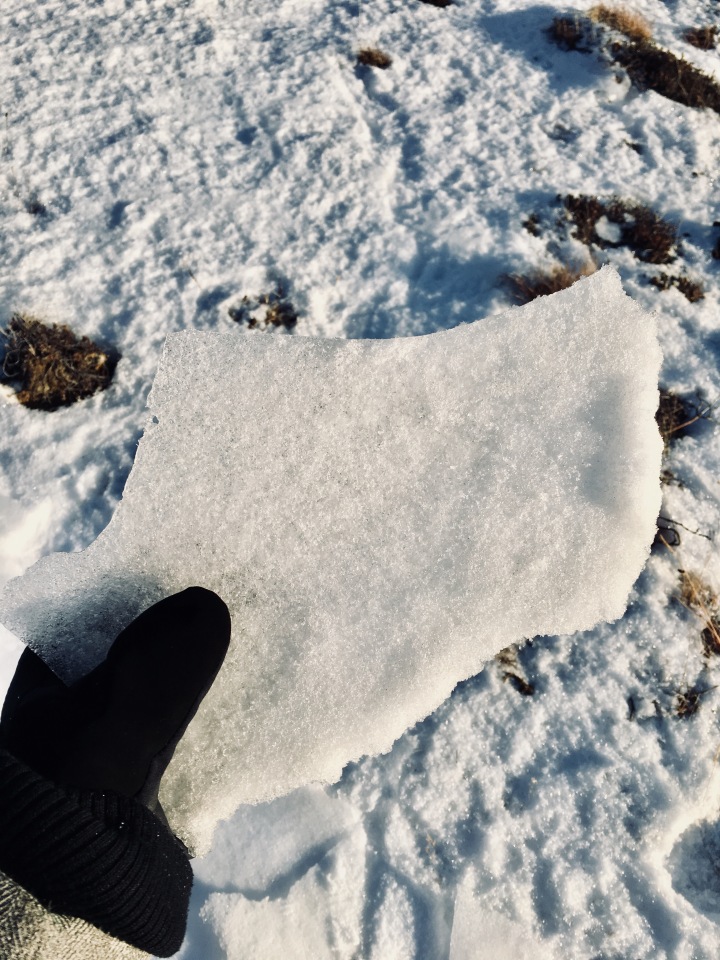 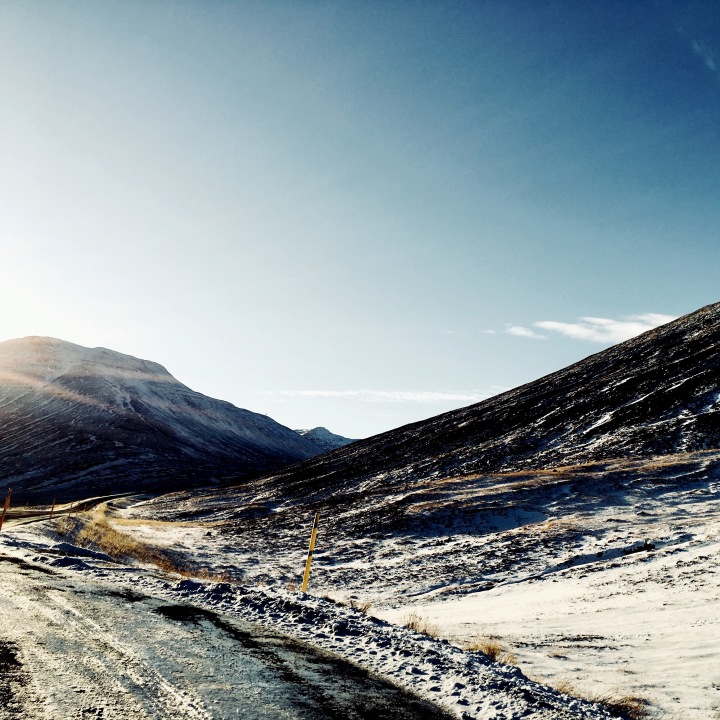 By early evening we’d arrived in Akureyri – Iceland’s second biggest city and the ‘capital’ of the north. It was here I got to see the Northern Lights for the first time, but more on that next week! x

4 thoughts on “A postcard from Iceland (part two)”

Blossom babies.
Sunny walks are lovely, but nothing quite beats a drizzly meander where there is nothing but the rain, twittering birds and the occasional bellow from a cow to keep you company.
Looks like spring, feels like winter.
New week, new season, new continent, new country.
There’s a coolness in the air most mornings now. The need for an extra layer upon waking. The days are still long, but the evenings are shortening and suddenly there’s a desire to snuggle into bed to read by lamplight once again. The change of seasons is here.
A late summer wedding featuring a tiny parish church, a wildflower meadow and views across rolling green hills as far as the eye can see. Is there anything better?