After five days and almost 2400 kilometres, we’ve made it to my parent’s house in Mackay, QLD.

To break the journey up, Adam and I decided to spend a day and a half in Lightning Ridge, in the north-west of NSW.

Adam had done some opal fossicking around White Cliffs when he’d worked on cattle stations in the area and was keen to check out the Ridge, which is world famous for its black opals.

It’s about six kilometres off the Castlereagh Highway, and surrounding the town are numerous mining camps, where people live and base themselves while they search for opals.

The mining camps fascinated me – the landscape was almost lunar; the shacks were creatively built using bits of old tin, parts of caravans and what ever else could be found and the plants were desert like – lots of tiny succulents and hardy bushes.

There were bits of mining equipment lying around and a great collection of rusty old cars.

In one mining area we came across an old open-cut opal mine. We visited in the late afternoon and the light bouncing off the sandstone walls of the mine gave it an almost dusty pink glow. 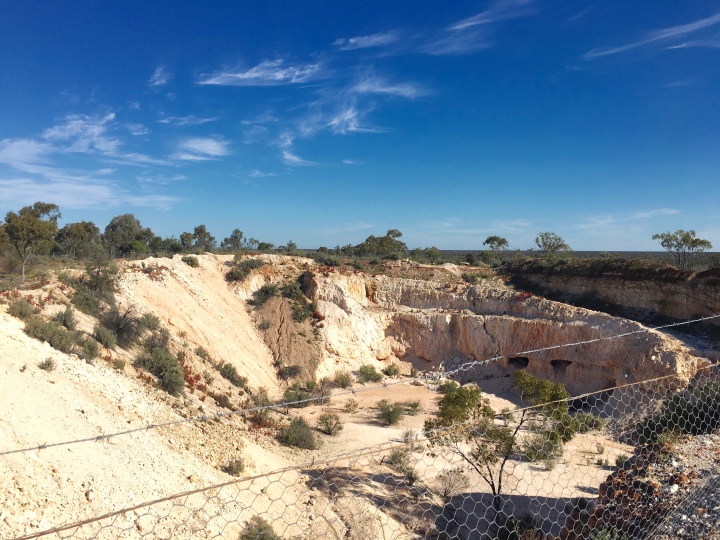 We took the time to visit a mine, and do an underground tour.  It’s amazing to think there are these tunnels and ‘rooms’ all underneath Lightning Ridge.  Delightfully cool too, particularly on a very warm October day.  The temperature underground remains at a steady 20-22 degrees year round.

We tried our hand at fossicking through some of the mullock heaps, but didn’t strike it lucky, instead opting to purchase a few souvenirs for ourselves and family.

We ended our trip to Lightning Ridge with a visit to the town’s bore baths. At 40-50 degrees, the weather was probably a little too warm for us to enjoy the full therapeutic benefits of the water, but they were still lovely to soak in before heading off to bed.  I can imagine in the middle of the winter, they’d be just wonderful.

We’ve got around two and half weeks in Mackay now before we fly out to the UK.  There are bags that need to be re-packed (and probably slimmed down!), friends to catch up with a few  day-trips to be had. Adam and I will have back to back winters this year, so we’re looking forward to making the most of the beautiful sunny, warm weather and beach while we’re here.