Once upon a time there was an eight year old girl who lived in northern Australia.  She’d never seen snow, only in movies and on television.  She liked to pretend the ash that fell from the sky when nearby cane farmers burnt off their crop was snow. Little did she know she’d grow up and one day find herself in her very own snowglobe….

Earlier this week I shared with you some of the highlights of a recent holiday Adam and I had in Latvia. While we spent the first part of our time away in the Latvian capital Riga, our final few days abroad were spent traipsing around the Gauja National Park.

We awoke on our day of departure to a good few centimetres of snow in Riga.  After brushing the powder off our hire car for the next few days, we navigated our way out of of the city and into Sigulda, the biggest community within the Gauja Valley.

We spent the morning exploring the Castle of the Livonian Order (built in 1207!) and going on a very short walk to check out a cave – that’s covered in etchings done by previous visitors – just north of the town and over the Gauja River. Due to the overnight snowfall and the fact it was the tourism low season, we had both places to ourselves. It was chilly sight-seeing, but the snow added such a magical feeling. 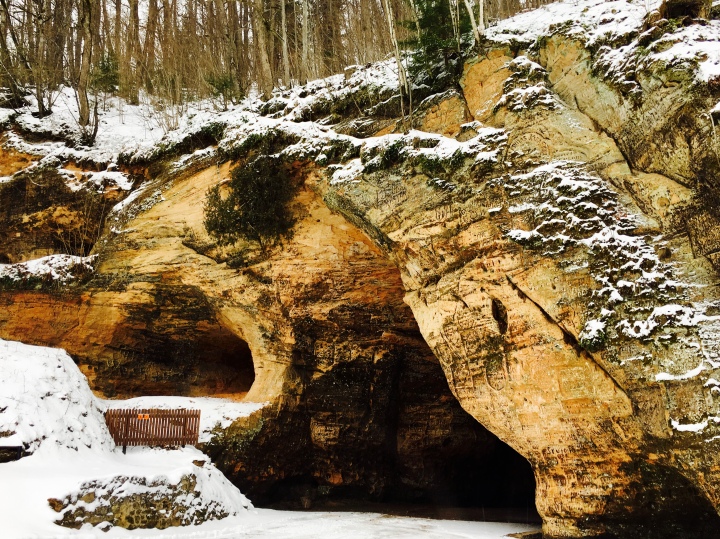 As we sat in a local cafe eating lunch the snow started to fall, thick and fast.  I thought it was fantastic, but Adam who was driving, began to get a little worried about the icy conditions for the next part of our journey to Cesis. We quickly finished our meal and hit the road.  The snow was dropping so quickly the road was becoming a sheet of compacted ice. It was a little hairy in parts, but Adam kept his cool and we arrived safe and sound.

Our accommodation for our time in Guaja was a small log cabin we found on Airbnb, just outside of Cesis in a town called Raiskums. It looked a treat when we arrived, covered in a thick blanket of snow.  This was the place eight year old me dreamed about during steamy summers in humid Queensland.  It was perfect. Inside was warm and cosy and I loved the small details our hosts had seen to, like the big bunch of daffodils on the kitchen table. 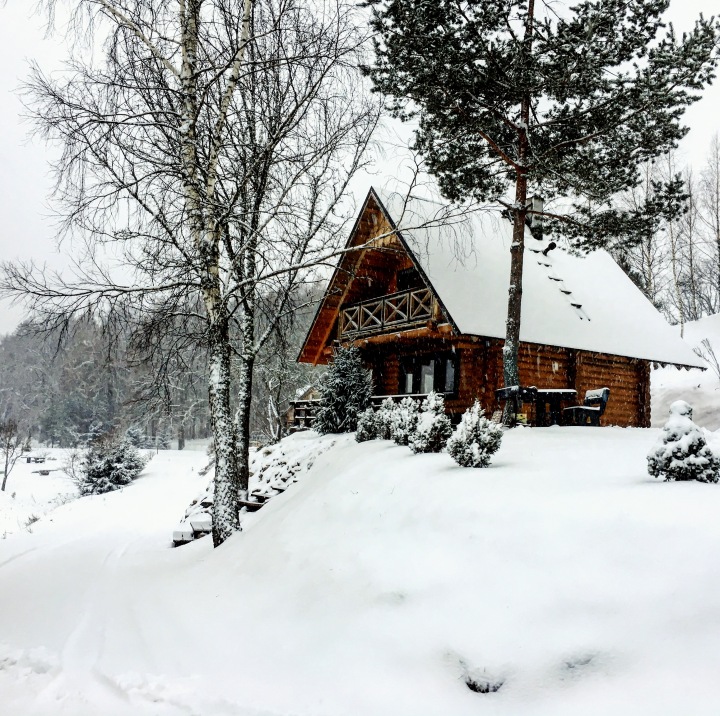 We spent the first half of our next day exploring the Cesis Castle complex . The ruins of the medieval castle were fantastic. The €5 ticket to get in was a steal, as it also bought you entrance to the ‘new’ Cesis castle (built in the 18th century) which was full of exhibits about the history of Cesis, as well as Latvia. We spent hours looking around.  In the warmer weather the complex has a kitchen garden and extensive grounds you can explore. If you’re in the region, I’d highly recommend a visit. 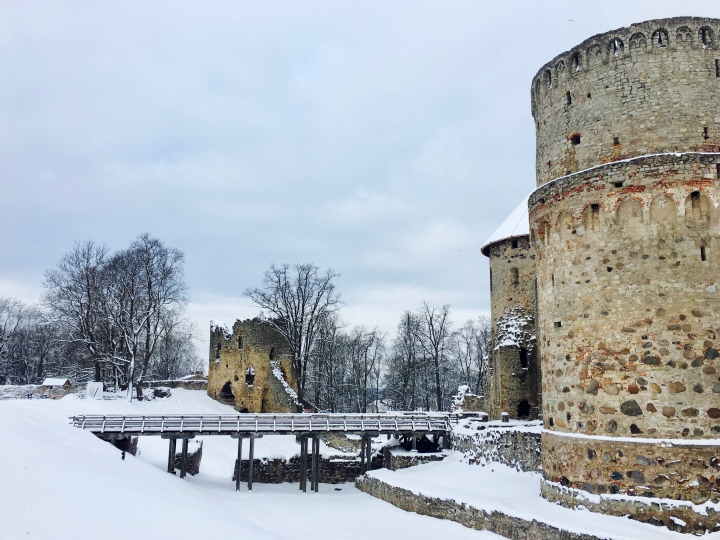 That afternoon we hit the ski slopes! There are two ski resorts right in Cesis. They’re pretty much in the suburbs and are only about a five minute drive from the town centre. I’ve skied quite regularly in Australia since moving to Wagga Wagga, as it’s only about two and half hour’s drive to the nearest few ski resorts. It was Adam’s first time however – he was both excited and a little scared. He had a private lesson at the Zagarkalns resort with a stern Scandinavian looking man and by the end, was confident tackling some of the ‘baby’ slopes with me. It was also incredibly cheap.  I think we paid just over €60 for Adam’s one hour lesson, two afternoon lift passes as well as ski hire.

Despite being a bit sore, I dragged Adam out for a walk in Raiskums after our afternoon skiing. I’d spied this church when we first arrived and was dying to get a closer look. Isn’t it just one of the most beautiful things you’ve ever seen?! 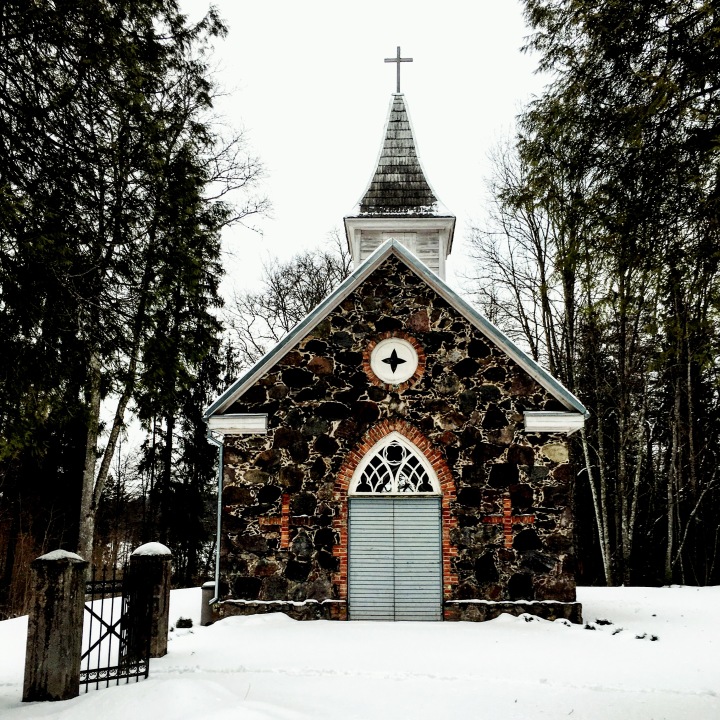 We awoke the next day to the most incredible sunrise and were sad to leave our little log cabin. It’d been a magical few days and we were so lucky our visit coincided with such a big dump of snow. We loved both the special atmosphere it created and watching the local residents go about the daily business in it. The snow was nothing out the ordinary for them and it was fascinating watching a weather event, that in other places would bring a community to standstill, just pass by so routinely in Cesis.

Adam and I loved our time in Latvia and would wholeheartedly recommend it to others. The history, the scenery, the people – it was just fantastic. Latvia is working so hard to propel itself forward after the Soviet occupation and it makes me happy to think our time there will (in a very small way) assist that ongoing development.

Have you ever travelled somewhere that took your breath away?!